Mr. Moran also oversees Viacom Velocity, the company’s full-service creative studio, which seamlessly integrates brands into the cultural conversation with custom content across all of Viacom’s platforms and experiences.

Over the course of his career, Mr. Moran’s ability to connect with partners and audiences alike has led him to develop and maintain deep, successful relationships with the world’s leading brands and advertising agencies. During his time at Viacom, Mr. Moran has held a number of leadership roles within the sales organization, including at MTV and VH1. He began his career in television advertising sales with Turner Broadcasting Systems, Inc. as a Sales Service Executive in the Turner Sports division.

Mr. Moran is a board member of the Ad Council, Video Advertising Bureau (VAB), American Advertising Federation (AAF), and sits on the advisory board of Fiver Children’s Foundation, a comprehensive youth development organization that empowers children from underserved communities. He’s been honored with notable industry accolades, including recognition on the “Adweek 50” list in 2017 for “Most Innovative Marketing Pioneers” and in 2018 for “Most Indispensable Media, Marketing & Tech Players.” A former professional basketball player in the Welsh and Portuguese leagues, Mr. Moran has also served as a board member of Peace Players International (PPI) since 2006.

A graduate of Brown University, Mr. Moran resides in Rumson, New Jersey with his wife, Marion, and their four sons.
Speaking At
Keynote Conversation 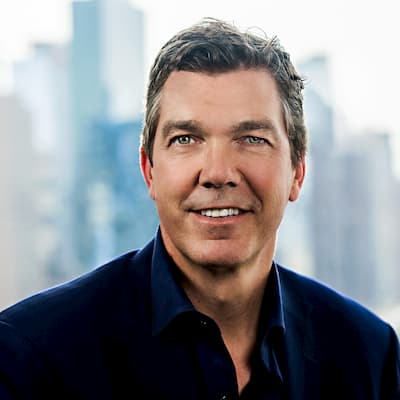