Anthony Filiaci’s love for television started well before he joined CBS News as a page in 2010. He was a self-proclaimed “TV nerd” in high school and he spent much of his college career working in the campus broadcast studio.

He felt right at home from the moment he first set foot inside the CBS Broadcast Center. Whether it’s the control room, the field, the edit suite, or the newsroom, he has experience in every corner of the news industry. Currently, he serves as a Writer/Producer/Editor for CBS News Marketing, where he develops promotional and branding campaigns, sizzle reels, and social media elements for all CBS News network broadcasts and for CBSN, CBS News’ streaming service.

Prior to his role with CBS News Marketing, Anthony worked as a special projects and field producer for CBS News’ affiliate services division, CBS Newspath. He covered countless breaking news stories and special events, including the 2016 presidential campaign and inauguration, three seasons of Thursday Night Football on CBS, and the Super Bowl. His most memorable assignment is a 360-degree/VR feature of rookie Navy sailors and Marines during Fleet Week in New York. He enjoys mentoring CBS interns and college students aspiring to work in the television news business.

Anthony holds a Bachelor of Arts in Journalism from Quinnipiac University. 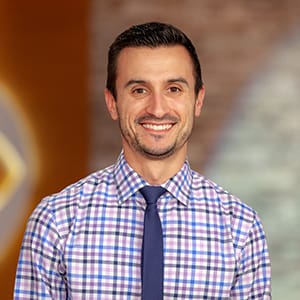