Job Title
CEO
Full Name
Roma Khanna
Company
REVOLT Media & TV
Speaker Bio
Roma Khanna is the CEO of REVOLT Media and TV where she is responsible for leading strategy and operations of the real-time, multi-platform brand and network, reporting directly to the Chairman, Sean Combs, and the Board of Directors. A digital innovator and entrepreneur with a proven success growing global businesses in TV, broadcast, digital, film and distribution and over 20 years of experience in entertainment, Khanna brings a wealth of experience to her position along with her relentless creative passion for socially impactful content that stems from the intersection of technology across infinite platforms.

Prior to joining REVOLT, Khanna was President of Metro-Goldwyn-Mayer Studios (MGM) Television Group and Digital. In her time at MGM, Khanna was responsible for the creation and growth of MGM’s Television Group and digital business overseeing all aspects of creative development and production along with deal making and business model structures on behalf of the studio division. She also led worldwide TV and digital distribution, including global distribution of MGM’s extensive film and TV catalog.

Under Khanna’s leadership, MGM Television developed a number of both critically acclaimed and commercially successful programs for a wide range of cable networks and streaming platforms including the development and sale of two-time Golden Globe® winning and six-time Emmy® Award winning and nineteen-time nominated series “The Handmaid’s Tale,” based on Margaret Atwood’s New York Times Best Selling dystopian classic of the same name, to Hulu; the multi Emmy® and Golden Globe® winning miniseries “Fargo” for FX; hit series “Vikings” for HISTORY and young adult drama “Teen Wolf” for MTV.

Over the course of her storied career, Khanna has received numerous accolades and awards including being the first ever recipient of Reed MIDEM’s “MIPCube Media Architect of the Future Award” for her pioneering work in the use of new digital platforms. She has also been named among The Hollywood Reporter’s annual Power 100 Women in Entertainment.

Currently, Khanna sits on the BAFTA Commerical Committee, the advisory board for the Peabody Awards and is a member of the board for the Canadian Film Centre where she previously served as chairman of the organization. She holds law degrees from both Canada and the United States, as well as a BSC and MBA. She is currently based in Los Angeles. 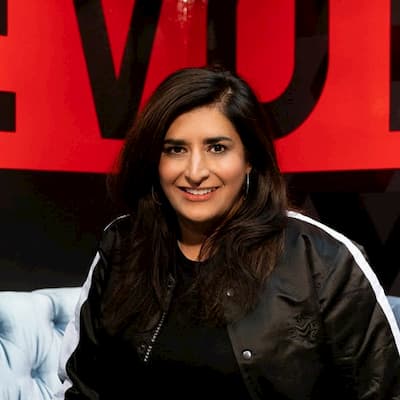