During his time at Nielsen, Karthik has held a variety of leadership roles spanning the U.S., Middle East and Asia for Nielsen’s Connect and Media businesses. Most recently, Karthik was the President of Nielsen Portfolio, where he led the Nielsen Entertainment, Nielsen Gracenote, Nielsen Brandbank and Nielsen Telecom businesses across all global markets. Previously, he led Gracenote during its acquisition and integration by Nielsen, which included building Gracenote’s management team, aligning its strategy, and driving growth across key markets and segments. Prior to Gracenote, he served as President, Expanded Verticals, and led the teams serving our advertiser and agency clients. Earlier in his career, Karthik was Executive Vice President of Digital Enablement, where he oversaw a global transformation program. He also led Nielsen’s Media Analytics business, which delivers deep analytical insights that help media companies with their ad sales and programming activities.

As head of Nielsen China, Karthik oversaw the company’s initiatives towards China becoming one of the company’s fastest-growing markets for Nielsen. Karthik began his career as an account executive at Ogilvy & Mather in India.

Karthik has a passion for talent development and serves as Nielsen’s co-Executive Sponsor for the Asian Affinity Link (AAL) internal employee resource group. He holds a degree in Economics from Loyola University in Chennai and an MBA from Illinois State University. 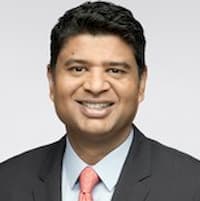