After working in New York City for CBS Inc., first in audience research and then in the international division of that company, he joined Turner Program Services (TPS) as Director of International Sales in 1985, where he was responsible for the marketing and sales of CNN and other programming services to broadcasters, cable operators, and hoteliers in Asia, Africa, Latin America, the Caribbean and Canada. In 1990, he raised capital, organized and directed the activities of ARX, an international developer of cable television properties in the Caribbean. Over the next 20 years, he has been involved in the development of hundreds of media projects throughout the world, from TV Globo International, to Mexicanal, MuchMusic Latin America,Travel Channel, European Business News, Canal Plus International, BBC World News and more.
Speaking At
Distribution Discussion: Changing Options for Delivering Content to Hispanics 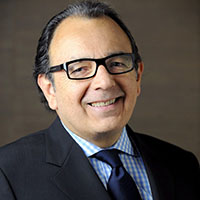