Name
Soumya Sriraman
Job Title
Founding President & CEO
Company
BritBox
Bio
Soumya Sriraman is Founding President & CEO for BritBox, a joint venture between BBC Studios, the subsidiary arm of BBC, and ITV, the UK’s biggest commercial broadcaster. In this role, Sriraman is responsible for the overall strategy and operation of BritBox. With her focus on bringing the best British content to the service through acquisitions, licensing, co-productions, and key partnerships, Sriraman launched and continues to grow the channel. Her direction has led to over 650,000 subscribers in less than 3 years with an emphasis on reach, engagement, and retention. Multi-Channel and Broadcast Magazine recognized Sriraman for her incredible work at BritBox, and awarded her, along with an exclusive class of her peers, the inaugural Wonder Woman in Streaming Award.

Prior to joining BBC Worldwide North America, Sriraman was President and Chief Executive Officer for Palisades Tartan US and UK where she spearheaded several Oscar Award-nominated/winning films, relaunched the Tartan brand, and expanded its distribution footprint globally. Sriraman has been named among Home Media Magazine’s 40 Under 40 executives and held positions at Warner Home Video and Universal Home Entertainment. She is a member of the British American Business Association and is delighted to serve on the Advisory Board of the Bentonville Film Festival.
Speaking At
Panel Discussion: “TV” is Dead(?), Part One – A Subscription/Pay Perspective 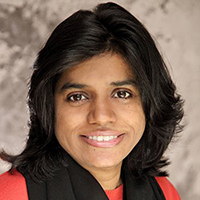