A broadcast veteran with more than 30 years’ experience, Staab joined NBCUniversal in June 2011 as President of the NBC Owned Television Stations group, a position she held for two years before expanding her responsibilities to also include the Telemundo stations the company owns. Under her leadership, the NBC and Telemundo owned stations have benefited from a significant investment in resources to strengthen their news gathering capabilities, including launching hundreds of hours of new local newscasts as well as digital/mobile platforms to serve English and Spanish-speaking audiences in the U.S. and Puerto Rico, hiring additional people in news including bilingual journalists to support the division’s bilingual newsrooms, overseeing the expansion and addition of investigative and “NBC Responds / Telemundo Responde” consumer units in all markets, upgrading newsgathering equipment, building of new sets and modern media centers in several markets, and pioneering the largest private weather radar network in the country which includes cutting edge fixed, mobile and digital weather radars. In recognition of her efforts for the NBC and Telemundo owned stations, Broadcasting & Cable named her “Broadcaster of the Year” for 2016.

Before joining NBCUniversal, Staab worked primarily at the ABC Owned Television Stations group as President and General Manager of KGO in San Francisco, WTVD in Raleigh, and KFSN in Fresno. She also worked at WPVI in Philadelphia as Director of Creative Services and Director of Marketing and Research. She launched her broadcast career as a college student at KLTV in Tyler, Texas.

Staab earned a Bachelor of Arts degree from the University of Texas at Tyler, which honored her with their Distinguished Alumni Award in 2012, and a MBA from Baylor University." 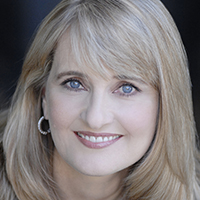