He is the founder, managing partner and president of Schramm Marketing Group, a conference production company, and a multicultural marketing and media services agency in New York, whose clients include leaders in television, sports, entertainment, telecommunications, publishing and non-profits.

Schramm is most noted for promoting soccer, and for representing brand sponsorships. He is recognized as the creator/producer of the Hispanic Television Summit, presented by Broadcasting & Cable and Multichannel News.

He is a cable industry veteran and has been inducted into the Cable TV Pioneers. In 1993, he introduced U.S. cable audiences to South America’s Copa America championship which kicked off his interest with soccer and Hispanic marketing.

Prior to founding Schramm, he had founded another agency, Team Services, and served in roles at Cablevision, Rainbow Media (now AMC) and at the Boy Scouts of America.

Schramm is a Long Island native, a graduate of St. Michael’s College, Vermont, and active with the Paley Media Council, Street Soccer USA and numerous other non-profit organizations.
Speaking At
Welcoming Remarks and a Salute to Our Sponsors 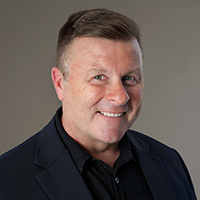