Robert G. Rose is a social & television entrepreneur focusing on developing business models that target under-served audiences while producing content and "media that matters." Since 2000, Rose has produced over 450 original episodes of television & negotiated partnerships with marketers and media outlets worldwide.

Rose's love of conservation surfaced early in his native rural Tennessee while traveling on vacation with his family. His love of international travel blossomed when he moved to New York City and began working for Univision, a Spanish-language TV network.

In 2000, Rose struck out on his own and began Artist & Idea Management (AKA: AIM Tell-A-Vision Group®). His first project, American Latino Syndication, became a long-running success. After selling American Latino Syndication to LATV in 2009, Rose began traveling in earnest. He lived and traveled abroad in Latin America for almost a year. His travels produced life-changing experiences that inspired him to develop what he felt was missing from the US commercial television landscape, an authentic travel show in a socially aware context.

"Raw Travel TV" premiered in the fall of 2013. Today, Raw Travel is in its tenth season. The show broadcasts weekly on over 175 local TV affiliates (CBS, NBC, ABC, Fox, CW) in over 95% of the US and notable international TV outlets such as National Geographic People in Asia, Fox Iberia and Europe, Amazon in India, and more. Episodes are also exhibited on major international and domestic airlines such as American, Delta, Air Canada, Finnair, and more, as well as a growing list of cruise lines and advertiser-supported and on-demand streaming digital outlets.

When not working on Raw Travel, Rose reads voraciously, volunteers, blogs, and runs a small digital record label, "Punk Outlaw Records." He has been a featured speaker or panelist at various travel, media, and tradeshows. He is a published writer & member of numerous TV, film & travel organizations.

Speaking At
Interview Spotlight: Producing Content on the Frontlines of Ukraine 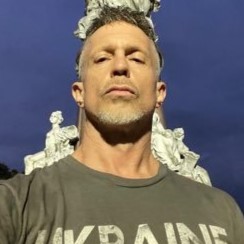